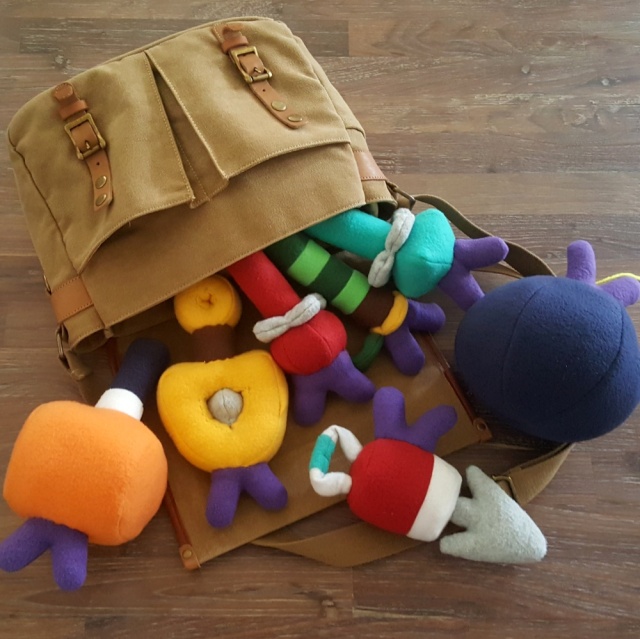 Ravio’s Shop Weapons from The Legend of Zelda: A Link Between Worlds

A Link Between Worlds is arguably one of my favorite Zelda titles for the nostalgia, creativity, and the fact that I was genuinely surprised every time that I had to solve a puzzle by merging into a wall.

As I had (currently unfinished) plans for a future Ravio cosplay, I figured I would get a head start by building a plush inventory for him!

(At the time of this post, only 7 of 9 weapons have been created. If there are plans to complete the remaining 2 weapons in the future, I will be sure to update this post.)

Both the fire and ice rods were structurally very similar, with the exception of the little “gems” at the top. To create the “gems”, they were broken down into “peel” form (QTY: 6 “orange peels” to make a sphere, and QTY: 4 diamonds to make an octahedron).

The shafts were made by making a tube with one closed end cap. For stability, an aluminum rod was placed inside and wrapped with quilt batting to keep it somewhat soft. To help prevent against the rod poking through the fabric at the end cap, a small circle of thick craft interfacing was added. The “clover” shape was made by a simple flat sandwich of fabric. A similar process was used for the ears, however the ears were stuffed to give them more shape.

The shaft of the tornado rod was similar to that of the fire and ice rods, with the only difference being the addition of stripes. Pipe cleaners were hidden inside of the “leaves” to make them poseable.

The hammer was made from a series of tubes, with interfacing added to the face of the hammer to make it a little more substantial when hitting things.

The bomb followed a simple peel sphere construction, with the only extra detail being a small yarn fuse added to the Ravio ears.

The hookshot was probably the most fun weapon to pattern. Similar to the shafts and handles of the previous weapons, the main body of the hookshot was a somewhat elaborate tube. A pipe cleaner was hidden in the small handle at the end to keep the shape and structure.

The Sand Rod required some creative plush squishing in order to fit all of the components together. The aluminum rod in this case, went through the entirety of the shaft, as well as through the “gem” to help anchor it in place.

And with that, Ravio’s Shop (of plush weapons) was finally completed!

Patterns Created by Me!

Tagged A Link Between Worlds, Ravio, The Legend of Zelda
Loading Comments...